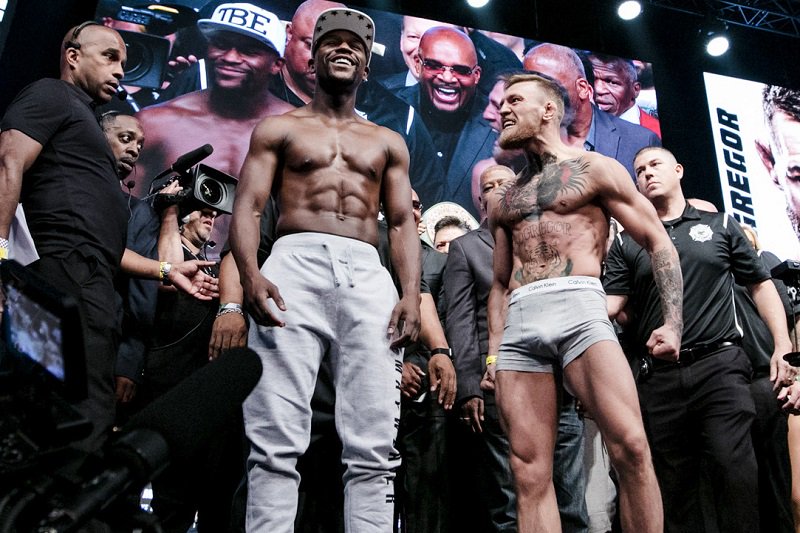 “Leading up to the fight when McGregor gets to Vegas, I know the UFC got a training facility, but we’d like for him to workout at the Mayweather Boxing Club,” Mayweather told TMZ Sports.

Just so happens on the week of the one year anniversary of their big fight we yet again of some Mayweather/McGregor news. Have to smile at this kind gesture by Money Mayweather. These two definitely respect the hell out of each other. All the animosity from the pre-fight press conference was certainly what I think was for show. They both put on a great show each time. These two guys should be best buddies I mean Floyd helped Conner get his biggest pay day ever in one night and Conner Helped Floyd get another 100 million or so in his pocket. That’s true friendship right there!

It really doesn’t make much sense for McGregor to workout over at Mayweather’s boxing gym. Sure he can do grapple training and all that there but when just 20 min south is the world class UFC headquarters where he has everything he needs there’s no point. Mayweather doesn’t know anything about his opponent Khabib. I can see Conner maybe popping in once or twice for some smiles and maybe some cardio. Certainly would make headlines if he did train there at the slightest. We all know both of these guys are headlines whores.
Mayweather even said he’ll contact Dana White or even Conner personally to try to get a ticket hook-up for the October 6th bout. Would be a quite a funny site to see him in the crowd cheering McGregor on.
UPDATE: Maybe this teaming up won’t be happening after all…

Easiest 9 figures I ever made! All work is what ? #MayweatherPromotions#TMT#TBE pic.twitter.com/32WGa78AHV

Fuck the Mayweathers, except Senior and Roger.
There is no peace here kid.
Step up or step down.

Life is better when these two hate each other anyway. Weather its real or for show.